What is Active Magnetic Bearing (AMB)

Industrial electric motors are the largest electrical end-users, accounting for approximately 45% of global electricity consumption. The existing high-speed electric motor solutions are inefficient and costly to maintain. Electricity and maintenance costs represent more than 70% of their total lifecycle costs. Active magnetic bearings (AMBs) are the solution to solve this problem. Industrial electric motors operate at high speeds (above 10,000 rpm). Hence, they are often subject to failures and breakdowns, which then compromises the productivity and efficiency of the entire system they drive. Our mission is to provide frictionless active magnetic bearings for high-speed electric motors. Thus, reducing electric motor system failures, maintenance, and electricity cost. 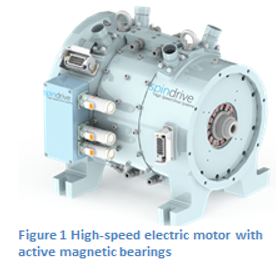 High-speed electric motors with magnetic bearings are getting increasing attention in the different industrial sectors. The motivation for their deployment varies considerably: the need to improve efficiency, and, thereby, to conserve energy and reduce environmental pollution, increase power density, enhance functionality, and improve reliability and maintainability are some of the key driving factors. Yet, in the context of new and more demanding industrial applications, ranging from distributed power generation to energy storage, to electric vehicles and industrial manufacturing processes, high-speed motors are still facing a wide range of challenges.

Active magnetic bearings (AMB) levitate the rotational part of the electric motor using electromagnetic forces. By levitating the rotor there is no metal-to-metal contact between the rotating and stationary parts. This significantly increases energy efficiency and reduces maintenance costs of high-speed motors. The need for high shaft speed is one of the factors that call for magnetic bearing over more...

Magnetic bearings rely on levitation that is the process by which an object is held aloft without mechanical support. The supporting forces can originate from several sources. When the forces are produced by the magnetic field the process is referred to as magnetic levitation. The levitation happens when two magnets (magnetic bearings) are pulling the body – in case of an electric motor the rotor – to each other. For that, the magnets are placed on opposite sides. A set of position sensors continuously measures the position of the rotor. Knowing the exact rotor location, the magnetic bearing controller can estimate how much force is necessary from each magnet to keep the rotor centred. Instead of permanent magnets, AMBs deploy electromagnets as they allow to change the force by adjusting the current in coils. Figure 2 illustrates the main principle of the rotor system levitated by magnetic bearings without any contact. 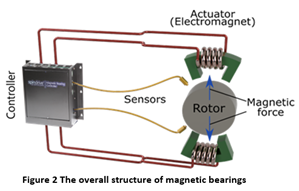 Magnetic bearings replace the traditional bearings in rotating machinery and do not require any other media (fluid or gas) for its operation, thus eliminating the need for lubricants. The sensors are evaluating the rotor position up to 100,000 times per second and can detect any subtle changes in the system. They bring additional information and insights from both the electric motor and process in which the motor is operating. The absence of mechanical contact removes the friction and corresponding losses allowing high-speed electric motors with magnetic bearings to be more energy efficient. As stationary and rotating parts do not touch each other there is no wear of components. Magnetic bearings provide all these features.

The principles of magnetic bearing technology are known for decades. Initially, it was a fully analogue system with bulky power amplifiers and unreliable control system build on inductive and capacitive elements. This significantly limited the applicability of the technology to only aerospace and military projects that could afford such complications.

The second generation appeared with advancements in the computer industry when digital control system has replaced the analogue one. The growth of computation power provided enough capacity to calculate control signals in real-time for the levitated body. Digital controllers provided reliability and ease of tuning.

The next breakthrough happened when switching power amplifiers appeared on the market. In combination with digital control, the third generation of magnetic bearings appeared. The modern power amplifiers are compact and fast. That is the moment when the industry started to adopt technology on a wider scale.

Now the next iteration of controllers is ready to hit the market. These will bring much more computational power allowing more advanced control. The fast connection to a cloud environment will bring the possibility to process a huge amount of data and extract valuable information from the collected data. With all the intelligence onboard, the magnetic bearing system is able to adapt to the most challenging situations, provide automatic tuning and commissioning and estimate the health of the rotating body and corresponding process. 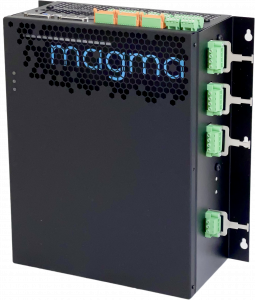 Active magnetic bearings eliminate friction losses, resulting in higher overall mechanical and energy efficiency. This will allow original equipment manufacturers to respond to the increasingly power-demanding applications while reducing energy losses and mitigating CO2 emissions. The technology of magnetic bearings is a game-changer solution where there is no contact between the rotating and stationary parts of the machinery. This means there is no mechanical wear, resulting in a minimal risk of failure. Consequently, there is a minimal need for scheduled maintenance and unplanned downtime affecting the whole production process of end-users. Also, the magnetic bearings are suitable for applications and environments that are sensitive to machine vibrations. Magnetic bearings minimize uncomfortable machine noise to the environment from the process or electric motor itself.

There are dozens of different applications for AMBs, read more information about typical applications of magnetic bearings from our applications page: Applications – SpinDrive – Easy integration across industries 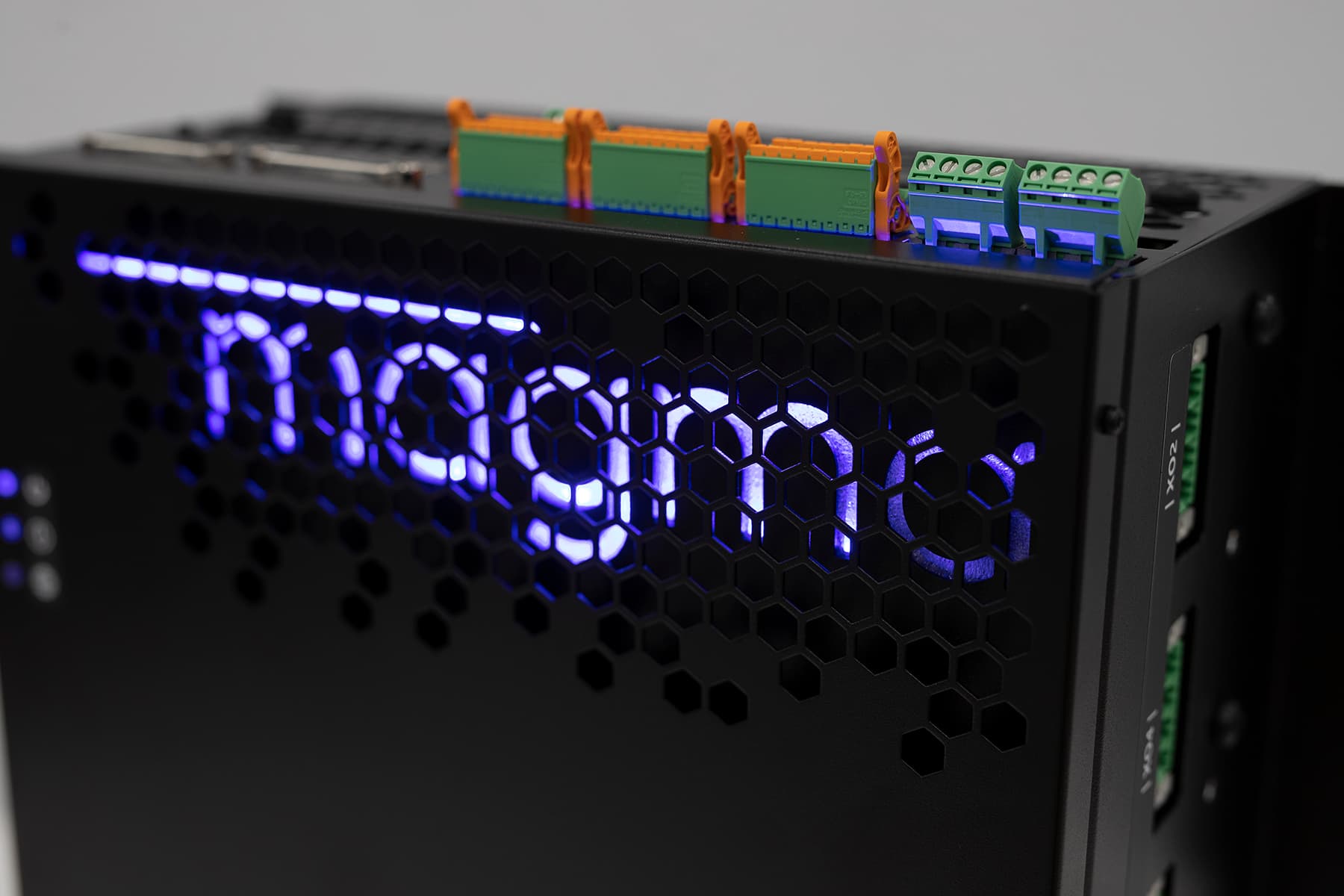 Calculate your own AMB

With this calculation tool you can quickly get indicative dimensions of your magnetic bearings.